Today, when I arrived at school to pick Fiona up, I saw that a new paraprofessional was temporarily working with her. I shook the aide’s hand and gave her my name. She gave me hers. Then she looked at Fiona:

“What’s your name?” The woman asked.

“What did we do today?” I don’t remember if Fiona replied, but the woman continued in this vein, asking my kid loads of questions Fiona was already supposed to know the answer to: “Where am I going next? … Where did I tell you I was going?”

Adults do this to Fiona all the time. They do it to her more than they do it to my other, typically developing kid. These kinds of recall questions aren’t genuine requests for information, such as, “Fiona, are you hungry?…. What was your favorite part of today?…. Did anything today make you angry?” Instead, these are questions in which the questioner possesses the right answer and is waiting for Fiona to dole it out.

Later today, I was describing the encounter to my husband when it dawned on me: The banking method! Paulo Freire writes about “the banking method” of education in “Pedagogy of the Oppressed.” It’s been a while since I’ve read Freire’s work, so forgive me if I don’t get all the nuances, but Freire argues that in education systems, low-income and minority students are given less opportunities to critically engage with content and are instead asked simply to receive and recall information. They are treated, in other words, like banks, where the teacher deposits information and then, at a later date, requests that the information be returned back.

I’m still under a book deadline, but if I had the time to dig up Freire’s work to confirm, I suspect I’d find this point: such teaching methods further disempower kids in oppressed socioeconomic statuses. And the same is true for Fiona and kids like her. By treating a girl with intellectual disabilities like a bank instead of a person, adults rob her of the opportunity to critically engage. Of course, they also rob her of the dignity of being treated like a person.

And the thing is: My girl doesn’t respond well to these lines of questions anyway. She shrugs them off, leaving the questioner to assume that she’s probably too disabled–let’s be real, “too retarded”–to remember. But Fiona has even remembered the middle names of her classmates when they were only mentioned once and never brought up again until weeks later.

Why wouldn’t she shrug off these recall questions? It’s no fun to be tested on a person’s name hours after you began your relationship with them. Imagine meeting a new coworker, and at the end of the workday, they pop by your office cubby and ask, “Okay, what’s my name? And what’s your name? And what did I do today at work?”

That’s not relationship-building. That’s not respecting another person’s intelligence. The problem, of course, is that a person with intellectual disabilities doesn’t often benefit from the assumption that she even has intelligence to be respected.

So yes, I said something to the aide. But I did so gently–or at least I hope it came off as gentle–because I realize aides don’t get enough time for professional development, and they’re just doing the best they can, and sometimes being an impromptu workshop leader in effective communication strategies is a bulleted item on my unwritten resumé as Fiona’s mom. 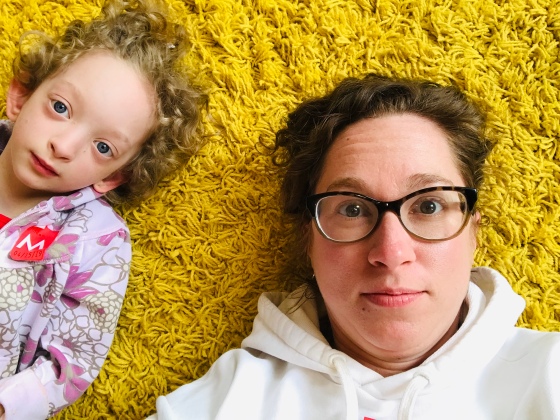 A selfie of Fiona and me lying on a bright yellow shag carpet. We’re neither smiling nor frowning. Fiona is far left, blue-eyed, wearing a pink floral hoodie, looking pensive, calm. She has curly blondish brown hair. I have dark brown hair (Gah, it used to be red), am wearing tortoise-shell glasses, and my eyebrows are raised a bit so I look slightly surprised.

47 thoughts on “Respect the Intelligences of Kids with Intellectual Disabilities”