The spine doctor walked in with a smile and told us this could be a pretty boring meeting.

“You want boring,” he said, and I agreed.

I love the spine doctor. In his picture on the hospital website, he’s unsmiling and has tersely German features and looks no-nonsense—which is fine so long as he’s great with spines. In person, he’s got the open, smiling curiosity of a kid, and his warmth is so readable that the second he walks in the room Fiona reaches for him.

“We usually just watch these things,” he said, handing Fiona back to my husband. He turned to the x-rays of my daughter’s spine, which six months ago showed a 33-degree curve and six months before a 34-degree curve, and hopefully today showed about the same. Or less.

I was holding Petra in a chair. Justin was wrangling squirmy, hungry, tired Fiona on the examining table. We were chatting. If you stepped into this room, maybe you wouldn’t have known that Justin and I had just spent several hours in a hospital, several hours coaxing Fiona through the x-ray pictures (surprisingly traumatic) and the initial kidney ultrasound, and the addendum of images to the original kidney ultrasound because the first set of images weren’t good enough, and the weight check and length check and the discussion with the nephrologist about constipation and kidneys, all while trying to keep both Petra and Fiona fed and reasonably content. It had been a grueling day, and Justin and I were significantly drained, our needs constantly shelved to meet the needs of two non-mobile, non-verbal kids. But now our moods were lightening, probably because we were finally seeing the light at the end of the long, children’s hospital tunnel. This was the last of the day’s events. There would be Korean and Japanese food afterwards. There would be bibimbap and sushi. We were in the homestretch.

And that’s when the hopefully boring, final appointment on a long day turned into “news.” The doctor stopped talking about “monitoring” and started saying things like “options” and “fixable” and “surgery.” And he repeated the phrase “forced hand.” As in, once the body’s spinal curve goes beyond 40 degrees, the body forces the surgeons hand. 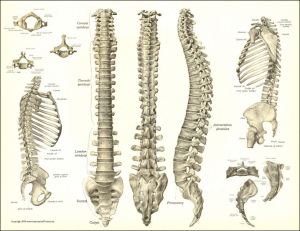 But it wasn’t just my stepfather who fixed spines. My aunt and uncle fixed them, too, and my other uncle. And my other aunt still fixes them, and my cousin, and my other cousin. In my family, we’ve had eight chiropractors in three generations. I come from a clan of spine-fixers. I come from a people who believe that an aligned spine is a holy thing.

The culprit of these abnormal vertebrae: those missing 120 genes.

I rarely curse those missing 120 genes. They are like guests that didn’t show up to the party, and it’s their loss. But at that party, the guests also planned my daughter’s body. I imagine the genes—tens of thousands—like little architects, pouring over my daughter’s blue prints. The sapphire eyes. The sandy hair. The narrow feet.

We made a plan with the spine doctor—better imaging, more pictures, and then another meeting soon. Then maybe surgery. Probably surgery. Neither Justin nor I had the heart to ask, “What happens if?” As in, “What happens if we do nothing?” Both Justin and I sensed that we didn’t have the energy to hear those answers.

Then we bid farewell and took the girls to the aforementioned Korean & Japanese restaurant. But it was no longer a treat. It was a necessity—we were drained and famished and facing a two-hour drive home. Fiona was so spent she fell asleep on the 5-minute drive to the restaurant. Once at the table, she whined the whole time.

There was salmon sushi. There was an avocado roll. There was bibimbap. But it was all wedged in our mouths between appeasing a very cranky Fiona, who was also so hungry she ate her weight in rice, and a fussy Petra, who wanted to nurse and sleep. I held Petra close with one arm and used the other to shovel spicy rice into my mouth. With a napkin, I dabbed red sauce off Petra’s baby-pink onesie.

A word about where we were: we were near the campus of Dartmouth College. We were in a restaurant where kids pick over the remnants of sushi rolls while their parents discuss the virtues of Montessori school. Behind us, two people who must have been acquaintances spotted each other and started talking. A man said that he was picking up food because his family was getting their kitchen remodeled. A woman said she’d done the same last year, and wasn’t it a pain to have to eat out all the time. It was, he said. It was really a pain. They both commiserated over the difficulty of having to eat out so that you could get your kitchen remodeled.

With one baby on my boob, and the other baby miserable and whining in her highchair, and with all of us facing a two-hour drive home that night in the darkness and the fog, and facing another drive back six weeks after to take more pictures of my daughter’s spine, and another drive two weeks after that, to talk about the pictures with the spine doctor, and eventually surgery and then follow-ups and uncertainty about my daughter’s future ad nauseam, I very much wanted to live in a world where I could complain about the hassles of remodeling one’s kitchen.

We were smack in the “all has gone to hell” hour, which occurs just before lunch. Petra was screaming on the boppy for the one thing Petra screams for — a boob. Fiona was on the floor, chucking her bottle across the carpet because she was tired or she didn’t want her bottle or she didn’t like the grip on her bottle. Who knows. And I was shaky from hunger and sitting on the floor between the two, positioned to keep Fiona from grabbing or kicking Petra, which Fiona’s wont to do. With one hand, I let Petra suck my finger. With the other, I tried to reposition Fiona’s bottle. I asked her to drink.

But my back has not yet recovered from the demands of carrying a human on the front-side of my body. (Exhibit A. When I posted this photo once, a friend said, “My back is killing me for you.”) 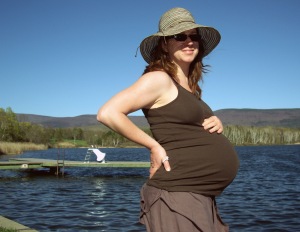 So my body wasn’t having this floor-level multitasking. “Screw this,” I thought, and grabbed Fiona’s pacifier from the coffee table and put it in Petra’s mouth.

But Petra spit it out and started wailing again.

Fiona looked down at her sister and started to cry. Not the “I’m not getting what I want” whine, but the pouty, frowning, red-faced, bona-fide expression that accompanies real tears. And real tears poured.

I stood her up. Was she upset that I wasn’t holding her? “Come here,” I said, and attempted to press her against my chest. She’d already put in a long morning of therapy, and I’d been nursing and holding Petra through most of it.

But instead of snuggling up against me, Fiona reached for her sister.

“Are you upset that she’s upset?” I said, and felt a little tickled by the sweetness. She’d come a long way since the first weeks of Petra’s life, when Fiona only wanted to claw at her little sister’s nearly bald head. She’d learned a gentler touch, and had even held Petra’s hand the other day. Now this blatant expression of empathy? As in, I hurt when my sister hurts? This was awesome. This was the seed from which the deeper sisterly bond would emerge, the one I share with my own sister, who I e-mail or call regularly about any number of issues, including my thoughts about my career and my fears about Fiona’s health and and my evolving attitude toward skinny jeans and my convictions on the perfect ballet flat.

“Aww,” I said, and let Fiona reach her sister.

She would stroke Petra with compassion, I figured.

Fiona would touch her sister gently in a tender expression of love.

At which point Fiona snatched the pacifier that had popped out of Petra’s mouth, attempted to put it in her own mouth, and stopped crying.

Note to self: How easily the well-meaning parent crafts delusional narratives.

Sisterly Bond is still a work in progress. 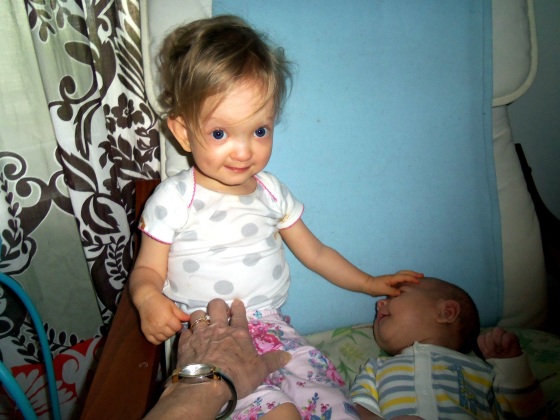