In November of 2011, three women came into my home, gathered around Fiona, who lay on a pink and green quilt several ladies from church made her, and assessed what she could do. Could she track a swirling light with her eyes? Could she turn her head toward the ringing of a bell? Could she lift her head up off the floor at least ten seconds when placed in prone position?

She was five months old. She could do all these things. But she could not do other things. They took inventory of her fine motor, gross motor, expressive communication, receptive communication, and emotional and social development. Then they spent several minutes tallying up her score. Was she delayed? How delayed? In what areas?

I learned that my five month old was officially but just barely delayed in gross motor skills, and unofficially in fine motor skills, but on-target or advanced in emotional and social development and receptive communication. I was thrilled. Her first grades were, as far as Wolf-Hirschhorn Syndrome went, pretty good. The therapists and I then mapped out an intervention strategy (which, partly due to our governor’s slashing of funds, was minimal, but more on that in a future post) and all professionals and one parent signed the multi-copied form.

Every six months, Fiona is evaluated in this way. Can she make consonant sounds in successive order? Can she push up on her arms, hold four-point? Can she hold her own bottle? Can she sit on her own?

Until last week, she could do none of these things. Now she can sit on her own for minutes at a time. And this has been a great victory—that my 18-month-old can now sit unassisted, albeit wobbly and leaning farther forward with each half-minute, so that eventually she looks like she wants to taste her toes. It’s okay. She’ll get better and better at it.

But even so, as the months go by, the milestones on the chart in The Baby Book (which I long quit consulting) are farther and farther from her reach. Kids her age are walking, speaking in short sentences, feeding themselves, and on and on.

There was time when I avoided learning what kids her age typically do. One evening at a restaurant this past summer, I held her in a booth, and my husband bit into his steak across from me, and an adorable redhead toddled by. She looked at all of us, smiled, and pointed at Fiona. “That’s right,” her mother said breathlessly behind her—she’d jogged to catch up to her kid. “Baby.”

Then the mother said, “She was a year in June.”

It was enough to strip away even the simplest of armor I wear in public. I could not hold it together. My face flooded with heat. I looked straight into Justin’s eyes with a raw kind of panic. I wept at dinner.

Fiona was a year in June.

“What’s wrong?” Justin asked, but he already knew. “Her age?”

I nodded. I’d just seen the redheaded version of my child if my child had all of her fourth chromosome. If my child did not have Wolf-Hirschhorn. There she goes, toddling past the kitchen door and toward the restaurant bar and across all the mile-markers that the occupational and physical therapists know by heart. There she goes, marching straight for language and letter-writing and college. There she goes. Out of my daughter’s reach.

This kind of thinking—this evaluating my child based on what she can’t do—it will almost always set me up for sorrow. Even while I feel relatively accepting of her condition, there are still moments that strike me. Now that we live in Vermont, Fiona has had all new therapy evaluations, and last month, the speech therapist assigned her a communication level of an 8 month old. I didn’t know whether to celebrate or mourn. Wow, great for a WHS kid! Or, My God, ten months behind other kids her age. The “on-target” status I’d celebrated a year ago is now gone.

And this month, while reading aloud the three-page report outlining Fiona’s gross motor assessment, her physical therapist announced that she was “at a four to five month level.” We sat on the floor beside the therapist’s huge tote bag of toys, and I nodded. Yes, I knew this. And I pretended I was totally okay with this. I knew my daughter had made virtually no gross motor progress in several months, not the kind you could verify on a report. I pretended that hearing this from a professional was not in any way like swallowing a stone. “She’s more advanced in the other areas,” I said, rationalizing that gross motor was her most challenging developmental category, which was true, but which also allowed me to pretend that stone wasn’t catching in my throat.

Despite how much I accept my daughter’s condition, I expect these reactions for the rest of Fiona’s life. Yes, I rejoice in who she is. Yes, I see the gifts she offers the world. Yes, I acknowledge that these gifts come in a body that’s far different from most kids. But I also know that, from time to time, the reality of her developmental delays and disabilities will hit me. Not like “a ton of bricks,” but maybe like a small stone in the throat. Or sometimes like a whole bag of stones, right on the noggin.

But as Trungpa Rinpoche, Tibetan Buddhist master, once said, “Living with yourself is like riding a fickle horse.” On the very same day that I might find myself disheartened about something Fiona hasn’t learned to do, a few hours later, I find myself delighted because of something small she can do. This is not just a “feel good” exercise, not just an attempt to tint my lenses pink. It’s a better way to approach Fiona. As Temple Grandin, Autism self-advocate, recently wrote in this Take Part article, “Special educators need to look at what a child can do instead of what he/she cannot do. There needs to be more emphasis on building up and expanding the skills a child is good at.”

A few of my comrades on the road to parenting a WHS kid have posted updates about what their kids can do. Though they may look minor to a parent of a typically developing kid, to us they are exuberant lists of accomplishments, hard-earned feats for kids who are missing a hundred plus genes. So here’s a partial list of what my daughter, at 18 months, has accomplished:

This is helpful for me—it illustrates Fiona’s progress—and it’s helpful for other parents of kids with WHS, who wonder what their kids might be capable of. But this “can-do” list isn’t quite the end of my post. Focusing on our kids’ capabilities is important, but it’s not the end-note in a life well lived. It’s only the flip-side of what sometimes causes me grief. She can’t do this, but she can do this! Well, what if she couldn’t do those things, either, Heather? Or what if she one day loses the ability to do those things? What if sudden seizures take away the developmental progress she’s slowly but firmly accrued? From time to time, by way of other parents and the medical battles that their kids fight, I’m reminded of just how precarious the health of a WHS kid can be.

So I would like to get beyond doing at all. And just appreciate her being.

It can be tough. Especially before they know about Fiona’s condition, mothers of a certain age—mothers fifty and under who were taught those milestone charts all too well—often ask me what Fiona can do. Is she walking? Is she talking? I’ve gotten this Fiona’s entire life. When she was four months, they asked, Is she rolling yet? At six months, Is she sitting up? (The answers then were no and no.)

Older mothers, mothers in their seventies and over, they never ask me these questions. I like to think it’s because doctors weren’t yet bombarding those mothers with developmental charts, but I might be inventing that. Even before they knew about Fiona’s syndrome, the older women at Justin’s church passed Fiona around and marveled at her sparkling eyes, her aware little expression, her probing little tongue. Oh, look at that! They said, and found new things to squeal over. These ladies delighted in my daughter. And in so doing, they taught me–a very stressed new mother to a daughter with a surprising new diagnosis–to delight in her. To forget about the milestone charts. To forget about the therapists. To just be with my daughter. Human being to human being.

“Here’s a ring,” I told one woman who said she’d watch Fiona while I ran to the bathroom. I handed the woman a small plastic ring. “For fine motor development,” I said, and wedged it into Fiona’s hand. We’d just started therapy, and I was in therapy overdrive. Therapy twenty-four seven. Therapy therapy therapy.

I cherish this lesson. 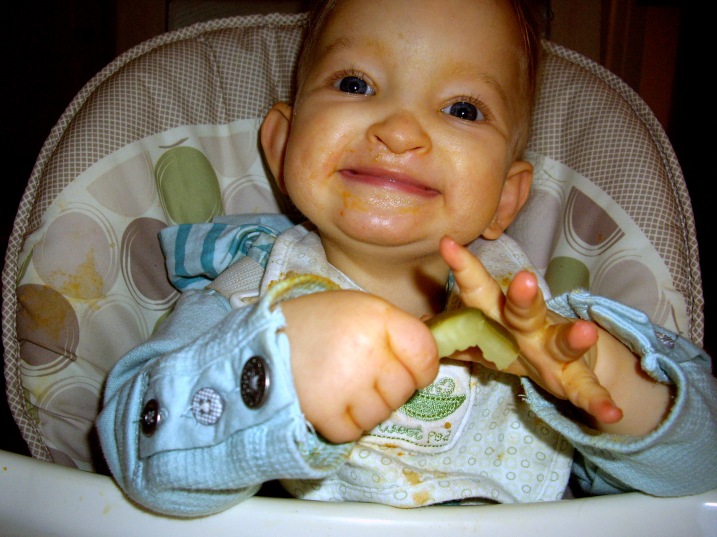