The Sun Magazine asked me to write a story about “Perseverance” for their 40th Anniversary Issue. I immediately thought of Fiona. Her eight to nine hours of therapy each week. Her tiny developmental gains that gradually add up to big … END_OF_DOCUMENT_TOKEN_TO_BE_REPLACED

I wasn’t expecting it, nor was I expecting that this event would feel so mighty, but on a random afternoon, my daughter strung two signs together to express what she wanted. For a girl who does most of her communicating through her eyes and through a million intonations of mm, this was pretty remarkable.

First she signed more. Fists tapped together. When I asked More what?, instead of grunting or glaring at the object of her desire—in this case the computer, which had been playing semi-obnoxious, kid-approved, cat-says-meow kinds of songs—she made her sign for music. Right hand waving widely in the air. (In American Sign Language, the hand would wave over her other arm, but Fiona’s limitations in gross and fine motor skills force her to create shortcuts.)

More music. Of course. If any child with Wolf-Hirschhorn Syndrome is going to sign her first two-word phrase, it would have to be more music.

She made a sentence, I told my husband later that day on a walk. I was ecstatic, smiling, buoyant in my otherwise sleep-deprived step, and the sun was breaking through November clouds. She made a sentence. I corrected myself. It wasn’t a sentence, not in grammatical terms—no subject and no verb. But by God, it felt like a sentence. Two thoughts put together. Two units of language, like two building blocks snapped into place, assembled to make something bigger. More.  Music.  More music.

Two words. Two blocks. The start of constructing a building, a shelter, a place to live. A home.

Nobody around me seemed to mirror the exact pitch of my high enthusiasm, and more music is now a daily phrase in this house, so I forgot about my initial reaction. Until yesterday. A special speech and language pathologist (SLP) came to our house to talk about augmentative and adaptive communication, or, in the acronym-overloaded world of special needs parenting, AAC. Here’s how I understand AAC: when the physical ability of producing words by mouth is not keeping pace with a child’s desire and cognitive ability to express herself, super awesome specialists descend from, in this case, Burlington, and help those kids and their therapy teams use AAC. It can look like pictures. It can look like a program on an I-pad. It can look like systems I probably haven’t thought up or seen. The expert SLP (hello, acronym) was sitting in my living room with a team of Fiona’s other therapists to assess what kind of communication system might help Fiona express herself more easily.

During this meeting, the SLP asked me if Fiona was putting two words together in any fashion: Two signs? A sign and a point? A point and a word?

Yes, I said. By now, Fiona had cobbled together a few more examples, though More music was by far her most popular phrase.

The SLP nodded, eyes wide. Throughout this meeting, she’d spoken quickly, animatedly, clearly excited about Fiona’s potential. Where so many others—oh reader, so many many others—have mostly pointed out my daughter’s limitations (she doesn’t want to bear weight on her hands, she’s not using her left hand very much, she’s holding her left hand funny so maybe she needs a splint, she’s not chewing, she’s not opening her mouth, she’s not closing her mouth tightly enough around a bottle, and on and on and backwards in time ad nausuem until the first day of her life [She’s not big enough]) here was someone in my living room highlighting not a single limitation. She was enumerating not a one gotta-work-on. She was simply ecstatic at what she saw in my daughter. And she said, and I quote, (because I frantically wrote it down), Linguistically she can handle anything.

What was my daughter doing, you ask? Just being my daughter. Responding to play cues. Kissing a doll. Making the doll dance. Wanting things and getting frustrated. Following directions. Putting balls in buckets and taking picture cards from therapists and sniffing them—the cards, not the therapists—and bouncing them and then flirting with the new faces of the SLP visitors by blinking rapidly and cocking her head to the side.

This behavior was apparently enough for the SLP. In less than an hour, a stranger saw brightness in my daughter, huge brightness. And to this stranger in my living room, signing more music was also huge.

The SLP explained to me that this simple expression—this two-word utterance, she called it—tells us that Fiona is in a completely different cognitive category than children who only utter one word. It indicates not only Fiona’s cognitive capabilities but also the size of her current working vocabulary. A typical child makes one-word utterances at 12 to 18 months, when she has a vocabulary of 20-30 words. A typical child combines two words at 18-24 months, when she has 50 words at her disposal.

Fiona can sign a handful of words and speak even fewer (including an approximation of yum, which really means water, and a version of woof-woof that is doubly impressive because she says it [a.] when she sees a dog and [b.] without opening her mouth.) But she understands heaps more. Probably hundreds more, and far more than we can assess.

The two-word utterance confirms what most of us who really know Fiona already believe: there is much more going on in my daughter’s mind that we can see. More than her physical body, currently at probably a 7-to-8 month stage, can show us. Fiona’s low tone and brain differences make forming consonants and words tough for her, but all day long she sounds like she’s trying to talk back to people. All day long, she will mimic the rhythm and music of words and phrases by making sounds in the back of her throat. She just won’t open her mouth to get the words out.

Good bye, you will say, and somewhere in that throat of hers, you can hear the musicality of your words as she replies in kind.

What would happen if we taught her how to use a device that let her get those words out?

The SLP said that Fiona is the first two-year-old she’s seen who fits the bill. She has both the high receptive communication (meaning she understands a ton) and the motor control to use a device. So in the words of the SLP, it’s not a matter of if she could use some kind of device, but what and when.

And yes, the writer-momma in the room nodded vigorously. 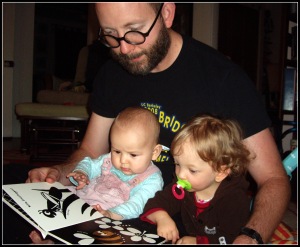 The gripping tale of “Hello, Bugs.”