It’s not easy to find an AAC consultant in this country. Anyone who’s looking for one knows this. AAC stands for “Adaptive and Augmentative Communication,” and it’s precisely what Fiona uses when she tells me (with her talker) that she wants one of my bras — a request she makes with fair frequency. My family has had the good fortune of encountering a few AAC consultants, but only thanks to the University of Vermont’s I-Team and their members’ willingness to drive several hours to see Fiona, along with several other AAC users in our town. (I suppose “I-Team” sounds like the “A-Team,” and although these people aren’t a “group of ex-militaries on the run from the government,” this much is true: If you have a(n AAC) problem that no one else can help, and if you can find them, you can hire… The I-Team.)

I’m told that the reason AAC consultants are so rare is because AAC is a sub-specialty in an already specialized world (Speech and Language Pathology), and I’m also told, from a current SLP graduate student, that AAC courses are not required in SLP grad programs. (Maybe this varies across graduate problems. Feel free to correct me if I’m wrong.) While I often feel like I’m bumbling around in the world of complex communication needs, the AAC consultants of the I-Team are ever inspiring to me, offering me tangible techniques that always presume competence of Fiona and stretch my assumptions about what she can do.

If you follow our story, you might recall our very first interaction with an I-Team member, who visited our house when Fiona was 2 and brought perhaps the biggest beacon of light I’ve ever received in my parenting life. A roomful of specialists were debating how many words to give Fiona through either a picture system or a speech generating device. Twelve words? Twenty-five words? Fifty words? I-Team member Maureen Nevers (who lets me use her name) said, “Give her all the words!”

It’s been a touchstone phrase ever since. Maureen’s confidence and high expectations gave me the permission to take a big leap for Fiona. With her encouragement, and with a chunk of money from the state, I bought an iPad and downloaded Speak For Yourself, a comprehensive, robust app with a capacity of some 14,000 words. Almost everyone on Fiona’s therapy team expressed skepticism. At that point, Fiona had zero ability to isolate a finger digit, making the squares on Speak For Yourself all but inaccessible. We didn’t know if Fiona would take to the app.

Fiona’s two hands are splayed across a screen of small icons, about a centimeter wide. You can’t see her face, but she’s three years old here.

Profile of 5-year-old Fiona seated at a table, looking down at her talker.

Giving a child with speech delays and disabilities a loaded iPad doesn’t solve all communication problems. Not even close. We’ve all (including family members and educators) had to make a concerted effort to help Fiona use her app, which is why my husband and I request that the I-Team still visit and observe Fiona. So in the final week of preschool last year, another bright beacon descended: I-Team member Amy Starble (who also gave me permission to use her name).

After observing Fiona during the school day, Amy and I sat in preschool classroom chairs and talked AAC. At this point, I was pleased with a lot of Fiona’s interest in and use of the talker. But I knew we had (and have) a ways to go in helping her communicate complex thoughts. I described to Amy what I believed would most likely happen after our meeting: I would put Fiona in her car seat, plop her talker on her lap, drive her home, and ask her questions about her school day.

“What did you eat?” I’d ask. And although she can easily find food items on her talker, she’d probably reply with the name of a kid.

I told Amy that this kind of conversation happens throughout the day. In some instances, Fiona will answer questions in logical ways, but often if I ask Fiona something, she replies with something nonsensical, and then I’m left wondering if she’s just exploring the talker, or if she has something else she wants to say, or if she doesn’t understand my question. I asked Amy: What do I do in situations like this?

I thought Amy would give me specific strategies like, re-ask the question. Or guide Fiona to other, more appropriate responses by modeling them.

Nope. And this is why I love the I-Team. Because their responses are always creative, surprising, and liberating. Instead of telling me how to do X-Y-Z, Amy shined her light on an assumption I was making. She threw my entire thinking on its head. I was assuming language always had to be functional. But, Amy said, typical kids played with language. They got to play with language all the time. You might, for instance, ask a typical preschool kid what they did at school that day, and they might reply instead that they flew a rocket ship to the moon. You know they flew no rocket ship to the moon, but you’re a well-meaning, imagination-encouraging mom, so you might say, “Oh really, what did you do on the moon?”

I nodded when Amy explained this to me. My three-year-old does this all the time. “Petra, what do you want for breakfast?” I’ll ask. She’ll ignore me and talk about how her fingers are people. She is the ring finger. Her sister is the pinkie finger. I am the middle finger. Dad is the pointer. I will nod and say, “Interesting,” and watch her touch each “family member” lovingly.

But kids with complex communication needs don’t get this opportunity as often. It’s hard to explain why this is so, but I’ll try. We (educators, parents, etc.) put pressure on these kids to use their systems in ways that show us they comprehend and can reply appropriately. With her talker, Fiona can easily say random things all day. Dinosaur. Up. Every. Silly. All she needs to do in order to say any of those words is touch her thumb to a square, and voila, a word. Much of her talker iterations seem random, particularly when she is sitting in the backseat of a car. (Sometimes, because she no longer uses a keyguard, she has rested her hand on the sensitive iPad and doesn’t mean to say anything.) But when I try to talk with her using her device, I am eager to hear meaningful responses. “What did you eat for lunch at school?” I ask, and hope she says, “meatballs” or “cole slaw” because both are believable answers. “What did you have for breakfast?,” Fiona’s grandmother might ask via Facetime, and I find myself hovering, hoping Fiona gives the correct answer—“eggs”—which would prove to me (and to Grammy and to any future school professionals, not to mention the hypothetical doubters, skeptics, naysayers) that Fiona can use her talker functionally. It takes a lot of motor planning and memory to say something purposeful, to not only find the “Eat” icon among 119 other icons on the “Speak For Yourself” main screen, but then to find “meatball” or “eggs” among the 100+ foods. Hitting any old word is way, way easier. So intentional, truthful replies validate to me that a.) Fiona comprehends her communication partner and b.) Fiona can use her device to communicate back. This is “functional language.”

But what about playful language? What about just playing with words? Kids who use AAC are given far fewer chances to do that, according to Amy.

This struck my writer’s heart. I started my teaching career as an English teacher in a Baltimore high school, and whenever my ninth graders and I began our poetry unit, I made “poetry packets,” envelopes filled with dozens of words written on strips of paper. These envelopes were basically the budget versions of magnetic poetry. I encouraged the students to take the words, move them around on their desks, and form strange combinations. I encouraged language play. Bright frown. Clear flower. Sky ache. The activity probably didn’t fit a single state objective, but I was a newbie educator, and this was, in my opinion, the best gift I could give my students: the realization that language is something you can take ownership of, rather than something that owns you.

To give Fiona more space to play with language, Amy suggested this: Fiona and I could write a story together. We could let our language take us wherever it led. As we created the story, I could write or draw it out. In this way, whatever Fiona hit on her talker could be incorporated in the story, even if it seemed nonsensical.

Write a story with Fiona? Hell yes. Why haven’t I thought of this before?

So, here it is: Fiona and my first fictional story, transcribed from a 13-minute audio recording. In terms of plot, it’s very avant-garde.

(I didn’t draw it out, but next time I will, because I think we were both getting lost with who was doing what where. Fiona offered all of the nouns, including all the PBS kid-show references. I added most of the verbs and other words.)

Dad teaches Aunt Katie. Then there’s Poppy. They all clap. Then they watch Super Why and clap fourteen times.

Fiona and Sid go to the park. They ride on the swings. It’s magical.

Fiona and Sid the Science Kid go to Aldi, then to the playground, then to the museum. Then they go back to school.

They go to the cafeteria and see Super Why. They sing Old McDonald Had a Farm. They sing, “…and on his farm he had some mice.” Super Why is good at singing. 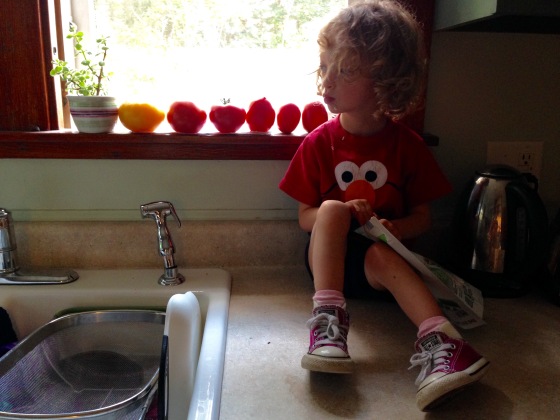 Fiona sitting on a kitchen counter beside white ceramic sink. She’s back-lit by a window, which is lined with tomatoes on the sill. She’s looking pensively to her right. 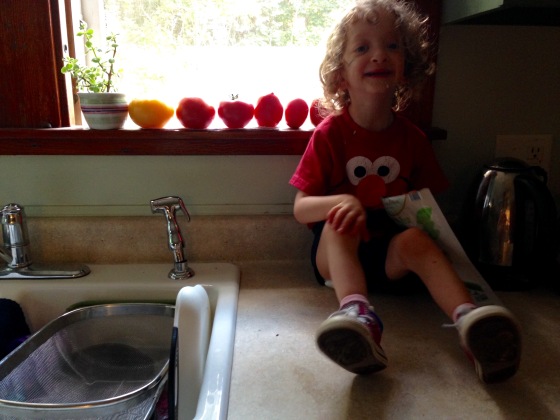 Same image of above, except now Fiona’s grabbing her knee, facing the camera, and smiling in squealy delight.